Considerations when planning your retirement

Retirement is something that most people look forward to but not everyone plans and prepares for. Often it is not good enough to be emotionally ready to retire but it is crucial to ensure that you are financially ready too. Before you walk away from a career that you have been immersed in for years and run off into the sunset, it is important to consider your goals and objectives.

If you can tick all these boxes then you should be ready to plan for retirement. Key areas to consider include;

The Australian Financial Security Authority (AFSA) has deemed the following incomes as adequate for a ‘comfortable’ or a ‘modest’ lifestyle in retirement.

As part of your retirement plan, it is also important to be mindful of common risks as you approach or enter retirement.

If you wish to seek assistance on your retirement plan, please reach out to one of our friendly financial advisers.

Who is the typical Australian taxpayer?

Remember the heady days of 2019? They were pre-COVID with fewer restrictions on our movement and a greater ability to get together.

Reminiscing about those pre-COVID days took me back to a large group dinner at a restaurant in which 100 people came together to celebrate. It was a day of freedom, fun and frivolity. The drinks flowed, whether one drank water or wine, the food was plentiful, the jokes – some a little risqué, some corny – added to the convivial atmosphere.  Then came the bill, with a side order of complication.  While some had lived large, others had supped on salad. This large group, in various states of sobriety, needed to decide how to split the bill. The fair thing might be for each to pay for their own consumption but even that was complicated. Some couldn’t really afford to pay.

Now, you may wonder why people came to dinner if they couldn’t afford to pay but what if the restaurant was Scotty’s Famous Restaurant (aka our Federal Government) and the diners were taxpayers paying for government services via taxation. How does Scotty do it?

Each year, the ATO distils tax information from 14.7 million people into a profile of 100 Australian taxpayers.  It’s a nice way of making information more digestible by converting a percentage to real numbers.

So, let’s take a closer look at the merry 100 diners in Scotty’s Famous Restaurant. But, before we do, as with pre-COVID days, the numbers are from 2018/2019 because:

(a)  We can’t have 100 diners together in a restaurant anymore (at least, not in Victoria) and some state borders remain closed.

(b)  The bill is paid after the meal or, to put in in tax terms, we pay tax after the end of the financial year; and

(c)  Some people reach for their wallets a little slower than others, submitting their tax returns late.

As you can see from the illustration below, Scotty’s Famous Restaurant has drawn people from all over Australia. 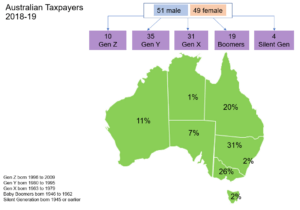 The split of diners is fairly representative of the population split in Australia.

So, how did our diners pay? Nine people paid 48% of the bill while 25 paid no tax.  Some felt that was unfair until the discussion at the table turned to the broader contribution each diner makes to society. Why should a nurse, a teacher, an ambulance driver or a police officer earn less than an engineer, architect or top footy player? 25 of our diners were happy to be earning income while out dining, ten of these operate a business in their own name, while the remaining 15 earn rental income (only 6 enjoy a rental profit).

Scotty knows that paying the bill can spoil a good dinner so he plans in advance and asks for money upfront. Eighty of our diners paid too much and received refunds, while 13 people didn’t pay enough and, not willing to do the dishes, they had to pay more. The remaining seven of our diners, we can call them Goldilocks, paid exactly the right amount.

So, who paid what exactly?  Nine of our diners paid 48% of the bill. Yes, that’s right. Ending the restaurant parable for a moment and returning to real life, 48% of income tax is paid by 9% of taxpayers. The next 31% of taxpayers paid 40% of all net tax while 25% of 14.7 million taxpayers paid no net tax.

We hope you enjoyed this visit to Scotty’s Famous Restaurant. While the restaurant itself is a fantasy, the numbers are a reality and perhaps remind us of the contributions we make, whether monetary or otherwise, are also investments both for our own future and the future strength of Scotty’s Famous Restaurant, aka the great fertile food and cultural bowl we know as Australia.

Thinking about buying your first home?

Buying your first home is a dream many Australians think is out of reach and saving for a deposit in an increasing property market only deflates one’s saving momentum.

The bank of mum and dad or an unexpected inheritance from that great aunt can assist, however, it is not often a bankable deposit.

The federal government has a saving scheme that helps first homebuyers make every dollar saved work that little bit harder.

I guarantee that many of you reading this have never heard of the First Home Super Saver Scheme.

So why are so few Australians saving for their first home through the First Home Super Saver Scheme? It is complicated, let me explain.

What is the First Home Super Saver Scheme (FHSSS)?

It is an interesting savings option that allows savings to be deposited and withdrawn from your superannuation account.

Investment earnings are taxed internally within superannuation at a maximum of 15%.

The voluntary super contributions that can be made are:

What are the FHSSS contribution limits?

What are the eligibility requirements?

What is the maximum release amount?

To sum it up, the FHSSS maximum release amount is:

To release the savings from super you need to apply to The Australian Tax Office (ATO) who will calculate the maximum amount that can be withdrawn upon a determination request.